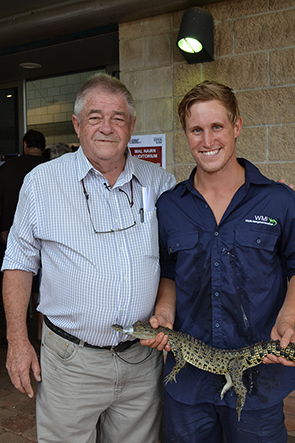 Professor Grahame Webb began researching reptiles in the late 1960s, and since the 1970s has been actively involved in the conservation and management of wildlife resources. He is regarded by many as one of the world’s leading authorities on crocodilian research and management, and on the concept of conserving wildlife through sustainable use programs. For his contribution to a new vision for wildlife conservation based on sustainable use he was awarded the prestigious Clunies Ross National Science and Technology Award in 2001. In 2003 he was awarded an Australian Centenary Medal, for his contribution to crocodile research and for the establishment of The Essington School in Darwin.

He first started research on crocodiles in 1970 and as a Professional Officer in the School of Physics at the University of Sydney, Sydney (1973-77), began full-time research into the biology and ecology of the Saltwater Crocodile (Crocodylus porosus) in northern Australia. During this period he worked closely with Aboriginal people in Arnhem Land, and became familiar with traditional management.

From 1977-78 he was an Honorary Research Fellow in the Department of Herpetology at the Australian Museum, Sydney, undertaking research on crocodilian anatomy and biology. From 1979-93, he held a similar position (Honorary Research Fellow) in the School of Zoology at the University of New South Wales, Sydney, still working on the biology, conservation and management of crocodiles.

Concerned by the constraints imposed on research by having to operate from formal institutes, in 1978 he formed a wildlife management and research consulting company, Wildlife Management International Pty. Limited (formerly G. Webb Pty. Limited). Conservation and management of crocodilians was the primary focus of WMI’s activities in the 1970s and early 1980s, but activities diversified greatly in the late 1980s and 1990s. They currently include activities ranging from pure scientific investigation and local environmental management to international issues in a range of countries (eg Indonesia, Papua New Guinea, Thailand, Malaysia, Cuba, Colombia, China, Cambodia, Madagascar, Philippines, Zimbabwe). This has resulted in WMI staff developing a wide range of skills and experience.

In 2000 he was appointed as Adjunct Professor at Charles Darwin University and awarded an honorary DSc in 2013 reflecting his outstanding contribution and dedication to research and education. Over the past 30 years, Professor Webb and WMI have established co-operative research links with many other Australian universities, including Murdoch University, University of New South Wales, University of Adelaide and the University of Sydney. At another level, he was Foundation President of The Essington School in Darwin (1989-95).

Crocodylus Park, a crocodile research and education centre in Darwin, was developed by WMI in 1994, and now serves as a base for the company’s operations. It represents a solid commitment by WMI to public education about wildlife conservation and sustainable use issues.
Professor Webb and key WMI staff have a long history of dealing with the public and the media, and are regularly invited to address conferences and other forums and events as keynote speakers. These commitments contribute to a schedule that involves extensive travel nationally and internationally.
As Managing Director of WMI, Professor Webb has been involved directly with all major projects undertaken by WMI, and has made a significant contribution to the scientific literature, personally authoring over 100 scientific papers and numerous publications in other print media.